The history of the Vienna Turf Club

The history of the Vienna Turf Club (Wiener Renn-Verein) is closely linked to horse racing and the breeding of Austrian thoroughbreds in the Austro-Hungarian Empire: 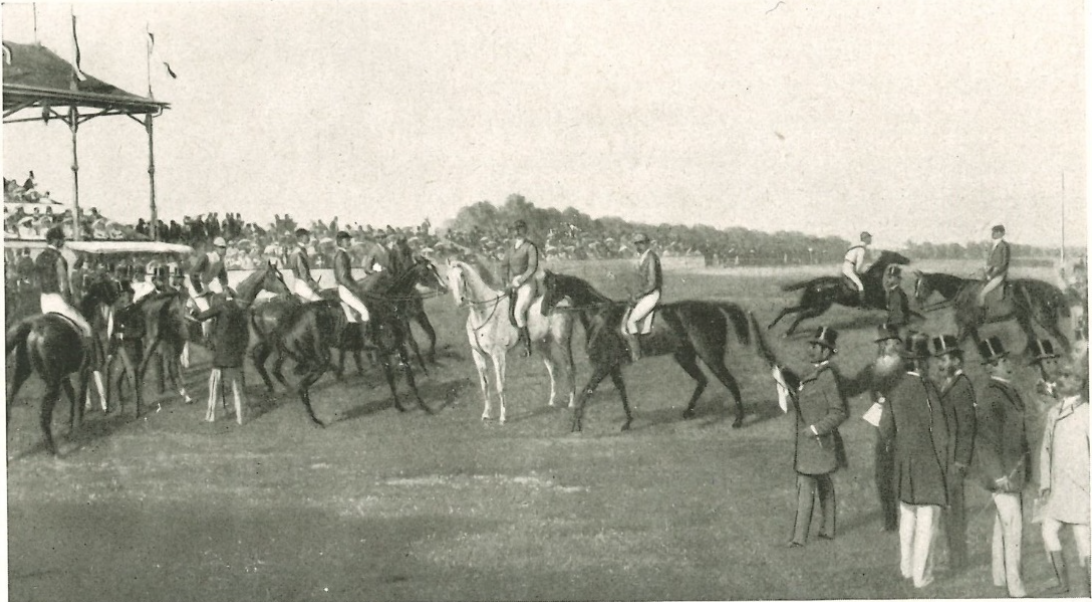 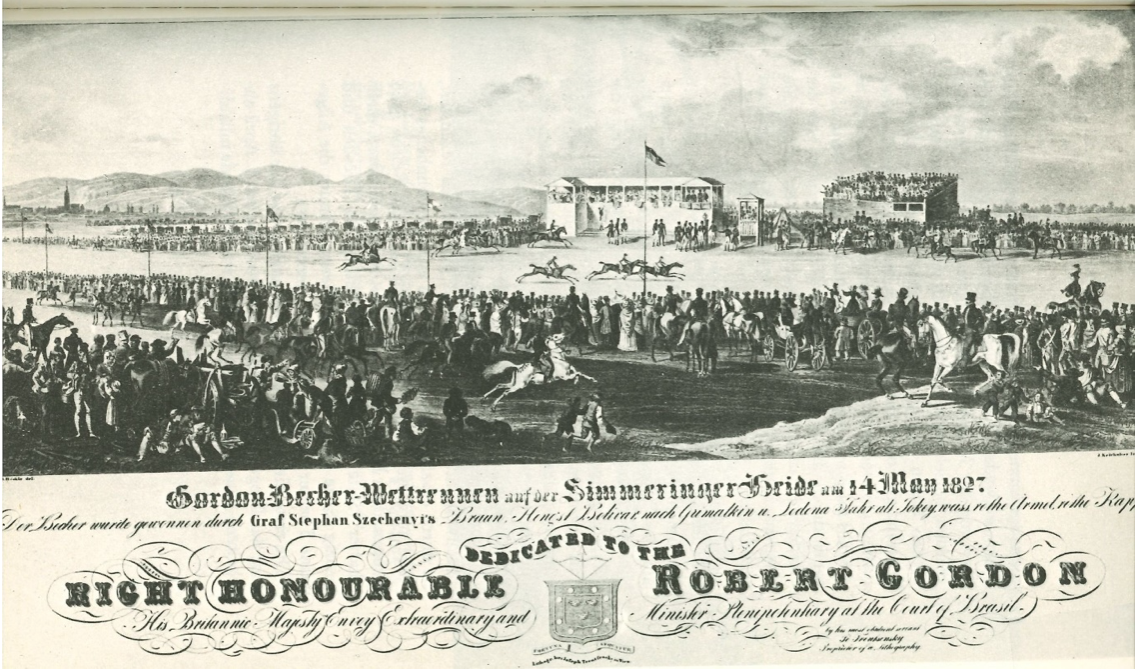 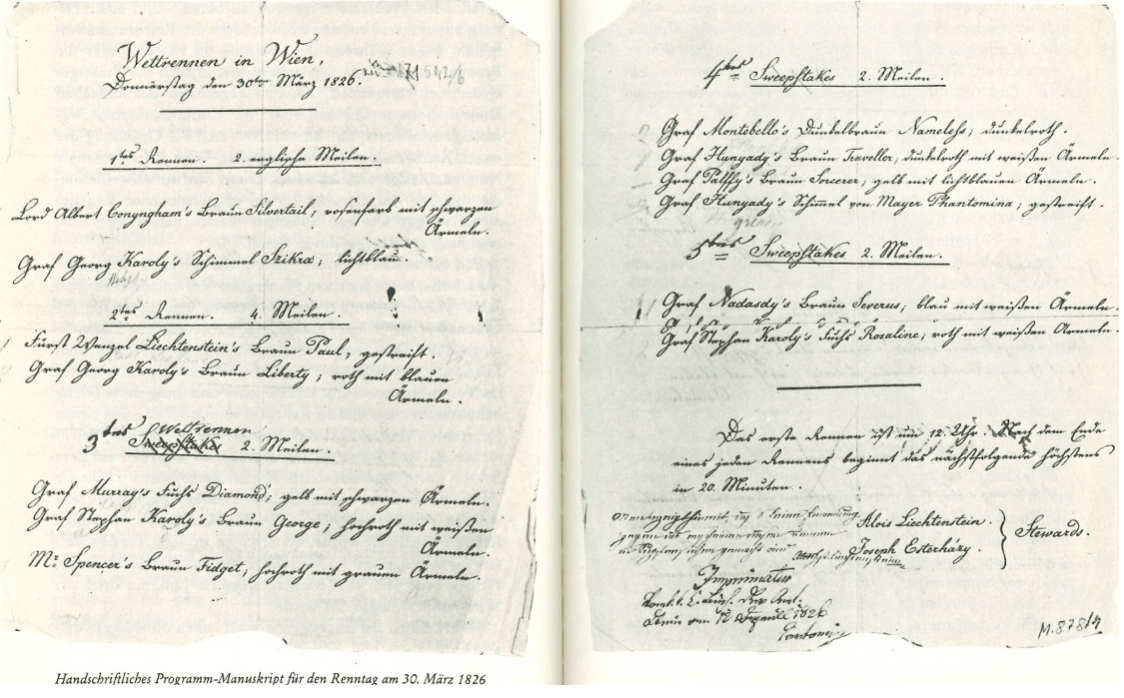 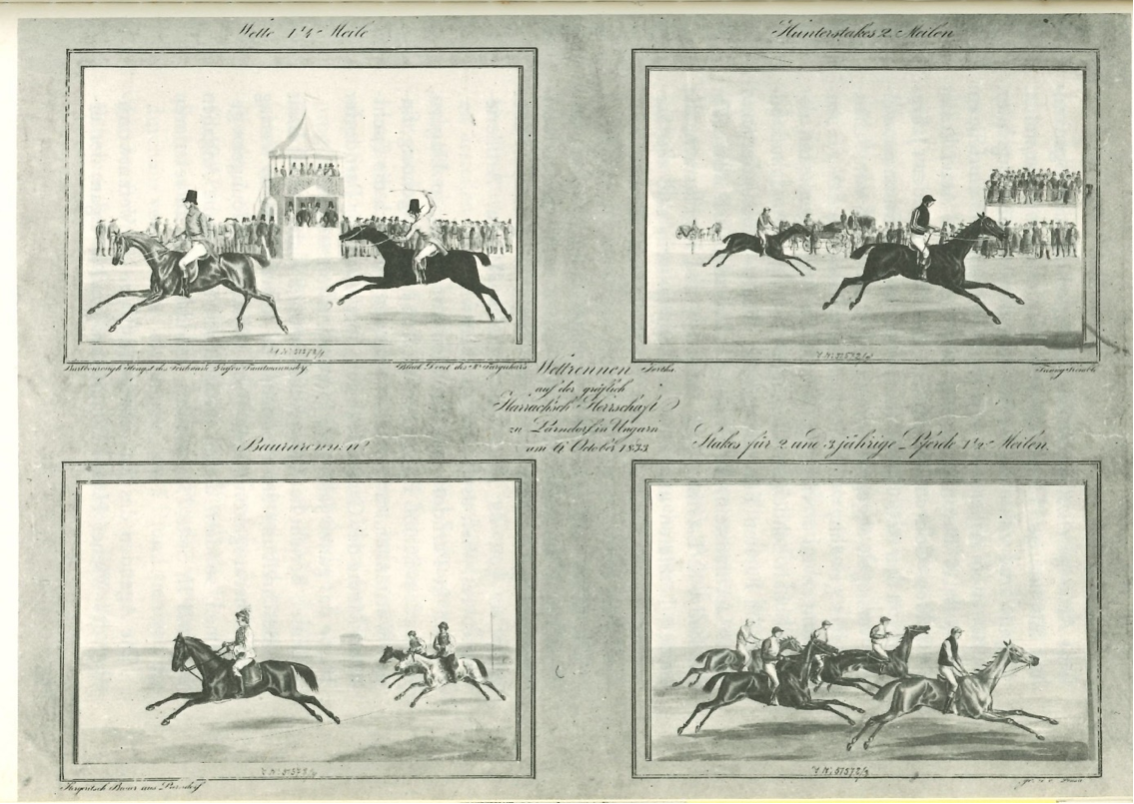 The following racing statistics have been recorded for the first 12 years of the Vienna Turf  Committee:

In 1839, under the chairmanship of Prince Alois of Liechtenstein, the following proponents were elected:

The committee then appointed the officials for the 1840 racing season from among its members:

The composition of the management thus showed no change compared to the previous years, i.e. since the foundation in 1838. It also hardly differed from the leadership of the Wiener Wettrenn-Ausschuss in the last year of activity (1837). According to the Wiener Theater-Papers 1837, p. 364, at that time Alois Liechtenstein acted as board member and Fr. Harrach, Th. Nádasdy and F. Trauttmansdorff as stewards.

From 1854 onwards, the Vienna Horse Racing Society was replaced by a racing committee and in 1857the Central-Verein organised the event for one year.

During these eventful years, the Viennese Sport journal, which acted as the official voice of the Austrian Racing Association, states the following in No. 22 of 1865 (p. 206) regarding the Freudenau racecourse:

“This new facility will correspond with the upswing that the Viennese racecourse is taking from year to year, and its implementation will be a new merit not to be underestimated which will be added to the successful efforts that the present President (note: Count Edmund Zichy) of the Racing Committee, who took over the business of the racing association that was re-established from the ashes in 1854, has devoted to this institution“.

From 1858 onwards, the Wiener Wettrenn-Verein (Vienna Turf Association) acted as organiser. It was constituted by decree of the Imperial and Royal Ministry of the Interior from 21 March 1858, under the presidency of Count Franz Harrach. The provisional management of the association consisted of Counts Johann Waldstein and Edmund Zichy. The judges were Counts G. Stockau and Geyza Festetics, Count Edmund Zichy was in charge of the scales, and Francis Cavaliero was the starter and secretary of the association. Until 1868, the organisation and running of the races was entrusted to the Wiener Wettrenn-Verein, which acted as the organiser of the races in Austria, especially in the Freudenau.

On 23 May 1868, the Wiener Wettrenn-Verein, as operator of the Freudenau racecourse, merged with the Jockey Club. In 1868, the Wiener Wettrenn-Verein was able to contribute a fully functioning, optimally organised institution such as a legally structured racing system. In the following decades, racing in the Austro-Hungarian Empire experienced a considerable upswing. The following personalities should be mentioned in particular:

The rapid upward trend and expansion of racing (1883: 22 events with 138 races) led to the founding of new events, some of which have survived to this day. Some of these, among others, are the Great Vienna Handicap, 1885; Great Freudenau Handicap, 1885; Count Nicholas Esterházy Memorial, 1886; Count Hugo Henckel Memorial, 1889.

However, with the collapse of the Austro-Hungarian Empire and the years that followed, racing operations dwindled and, particularly in 1919 and 1925 as a result of the economic crisis after the First World War, losses exceeded the income. In 1925 and the following years, the financial pressure steadily increased as did the danger of a complete shutdown of the racing operation.

On 1 February 1932, the racing operations were finally retransfered from the Jockey Club to the Wiener Renn-Verein, which at the same time transferred the supreme management of all matters relating to racing to the Renn- und Campagnereiter-Gesellschaft and its president, H.S.H. Prince Kinsky.

The 1st February 1932 is thus a historic date in the history of Austrian equestrian sport. By merging the two previous sections 1 (gentlemen riders) and 3 (breeders and owners), the Vienna Turf Club was finally re-established on 7 March 1932 under the chairmanship of His Serene Highness Prince Ulrich Ferdinand Kinsky von Wchinitz und Tettau as President of the Renn- und Campagnereiter-Gesellschaft and the entire racing business was transferred back to the Vienna Turf Club under its own responsibility.

After the administrative measures had been taken, including the establishment of a racing secretariat in Mahlerstrasse (Hotel Bristol), the new season had to be prepared at full steam, with only a very narrow margin remaining until its opening.

The Wiener Renn-Verein was a corporate member of the Campagnereiter-Gesellschaft. Its members at that time were entitled to be admitted as members of the Renn-Verein. Ladies who were family members of a member or who were themselves racing stable owners could also be admitted as extraordinary members. The headquarters of the Vienna Turf Club were initially located at the Hotel Bristol, Mahlerstraße 6, 1010 Vienna. Mahlerstraße was also the home of the racing secretariat.

After the resignation of President Prince Kinsky, Field Marshal Carl Graser was elected President on 9 January 1937.

The turmoil of the times, however, also left its mark on this appointment. After the annexation by the Third Reich, the statutes were changed, the board of directors under Anton Graf Apponyi resigned and the club premises were moved to the premises of the officially dissolved Jockey Club in the Philipp-Hof, which fell victim to a bombing raid in February 1945 together with all the club’s documents and archives. In August 1945, the Vienna Turf Club was finally reactivated and undertook everything to help racing get back on its feet. The racecourse in the Freudenau was rebuilt with the help of the British occupying forces and the first race was held again on 14 April 1946 with the Prize of Vienna.

After an interlude in Stiegengasse, the Vienna Turf Club finally found its new home in Palais Pallavicini in 1946. On 30 March 1946, Vice-Chancellor and Minister for Industry Dr. Eduard Heinl was elected President of the Club and high-ranking representative of the first Austrian government under Federal Chancellor Leopold Figl.

Since then, the Vienna Turf Club has explicitly been a non-political association, its club premises serving the cultivation of sociability, international relations and cultural purposes. At the same time, the Vienna Racing Club still has strong ties with the Hofburg and diplomacy.

In addition to the racecourse management, the Vienna Turf Club also serves as a centre for political receptions and events after the Second World War. State banquets and counter dinners illustrate the outstanding importance of the Vienna

Presidents of the Wiener Renn-Verein since 1932

Founding members of the Wiener Renn-Verein